The snowflakes are buttons, I cut the shanks off and used Glossy Accents to adhere them. I also used glossy Accents inside the snowflake....but is it really a snowflake? Hmmmmmm......let's just say it's my kind of snowflake! LOL! 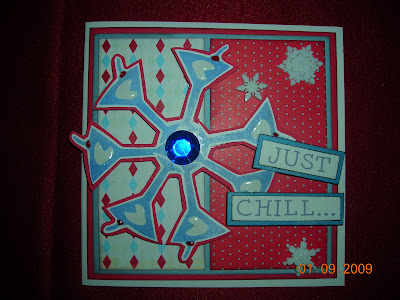 I stamped the image 7 times and adhered them onto a die-cut I had made as a guide for placement, and it worked out great to use for additional support under the stems. That's right, a die-cut from my Cricut using the upper layer of a SYI cart! Did you really think I wouldn't use my Cricut? 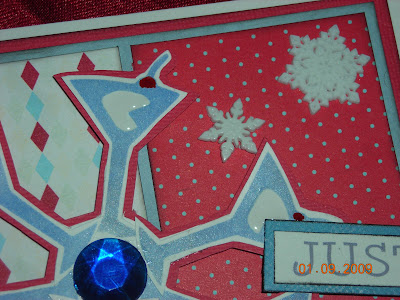 The inside side of the card says JUST SHAKE AND POUR with another image of the martini glass underneath the saying. It isn't what I had originally planned, but it turned out okay!

Cheers!! I wish those kind of snowflakes were this far south!!
Cute card as usual! I did not "get" it at first!! I am a little slow sometimes...

Only you would come up with something like that!! lol

Oh - and thank you for the thank you card! LOVE that one too! Of course - I ALWAYS love getting mail from you! You are good for me! =o)