After my youngest son broke his arm in September he had to have x-rays and a new cast put on every couple of weeks, not only did he love the attention, but he loved getting everyone to sign his cast. I would ask him if I could sign his cast and he would say "NO!" because he knew I would sign it with a heart for the O, and he thought it would be embarassing to have a heart on his cast. After a while it became a game for me to try to get him to let me write my name...but he never let me.

This LO is the closest that my name ever got to his cast! LOL! 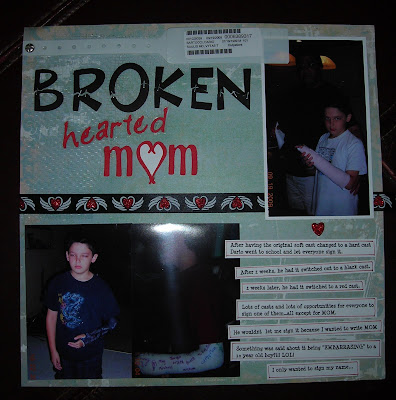 I stapled the word BROKEN by using my new Tiny Attacher that I rec'd from Marjorie in Round 7....WooHoo...what a fun tool! 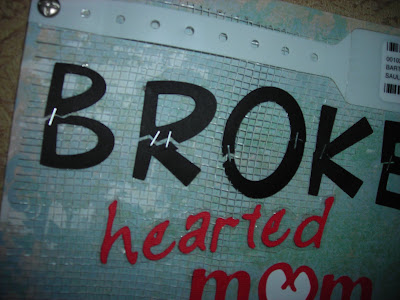 Denise this made me LOL. 10 year old BOYS! Gotta love 'em, even when they don't want you to. Great layout. Love the broken letters with the staples. Too cute! xxD

Kids i tell you they think we are out to ruin their world when we just make it colorful! That's my story and I am sticking to it. Great layout

I love it!! You're so incredibly talented! Years from now when you all look back on these pages I bet you'll be thanked repeatedly for capturing these memories- especially since your love for your family just shines through each page you do!! You totally ROCK!!

What a great page Denice! I love what you did with the staples, very clever ;)

GREAT LO!!!!! Love the staples, but ESPECIALLY love the MOM with the heart as the O in the title!

What a hoot! Boys and their desire to "be/not be" the center of their mom's affection! Great job on the layout!