When making this card I accidently cut myself with my scissors, and I thought it uncanny that my finger was bleeding while making a card about vampires. Then I looked down and saw my glittery nails and started laughing, thinking it truely was a "Twilight" moment! LOL! 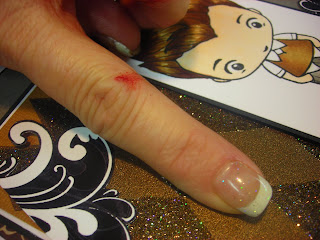 The sentiment on this card reads: DIAMONDS are a girl's best friend because I think diamonds are as perfect and sparkly as Edward's skin...and don't forget that Bella sports a dazzling diamond from the abfabulous Edward himself! 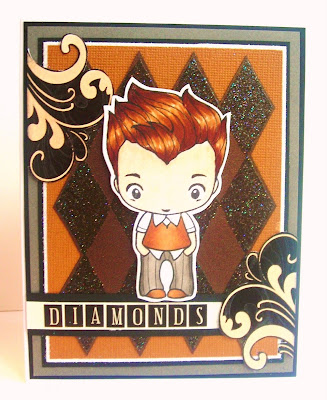 Here's a close-up of Edward's hair...DAZZLING!!! 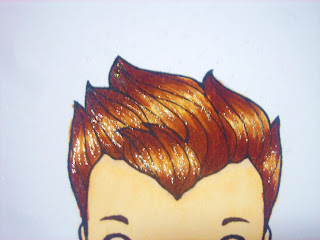 Since TGF is celebrating Twilight and the newly released Breaking Dawn in which Bella and Edward finally get married, TGF will be giving away the "I DO" 4x6 wedding set to TWO lucky winners who comment on the DT's blogs and return to the TGF Blog to let us know you've seen all the sparkly magic! TGF will leave commenting open until 10pm on SUNDAY, November 27th to allow for an easy and relaxing hop during the holiday weekend!

Thanks for stopping by, I hope you have a blessed and Happy Thanksgiving!

Hi,Love the sparkely hair on Edward!His one of my fave TGF stamp!
hugs
Doreen

Too bad they don't have Twilight band aids. Love your card.

lovely sparkly nails, not so good about the blood, thank goodness it didn't go on your beautiful card x

Cool sparkle in his hair. What did you use? Ive been searching for some good sparkle and Ive yet to find some.
Happy Thanksgiving Denice!
Jess M :)

I love how you added sparkle to his hair.

Love the monochromatic theme and the sparkles! His hair is just great. Thanks for sharing your talent, Denice!

Very cute card. Did you consider for a second wiping your blood on the card? No? :)

Awesome, love the sparkle in Edwards hair! Hope you finger is okay too!

Ok, seriously, the best coloring ever!!!!! Love this card... and Edward is so dreamy! I'm giggling at your "mishap" ironic huh? Jasper would be all over you! Poor girl... hope you heal well! Happy turkey Weekend!

Love the sparkly hair!!! And the diamond background it great!!! TFS!

Love the sparkly hair on Edward. He's too cute.

Oh Denice. I am sorry that you hurt your finger, but I have to admit that I love the way your thought process works. You sound so much like me. I would totally have gone there. lol... I love, love your Edward card. He truly is DAZZLING! You did a great job on this one. I was very lazy about my blog this week and didn't even visit anyone elses, so I am trying to play catch up tonight. I wanted to stop in and say Hi. Hope your weekend is off to a great start. Hugs, Lisa

I am loving this with all the dazzle!