For some reason I've created numerous reasons for myself to craft this holiday season...I think it's because I decided a couple of months ago that I've spent my fair share of money on crafting supplies and I should use them more often.  That could be one of the reasons, but it could also be that I just like to create?!!

I needed a quick and inexpensive gift for a  handful of 7th graders who come to the house every Wednesday for CCD class, and as this week's class was the last one until after the new year I needed to make it pronto.   I grabbed some large sized Hershey Bars ($1.50 ea at Target) and my Cricut Inspired Heart cartridge and this is what I came up with: 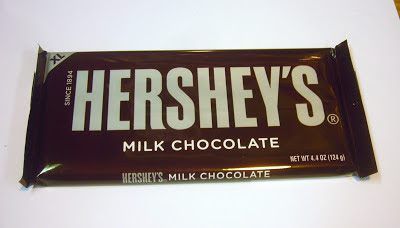 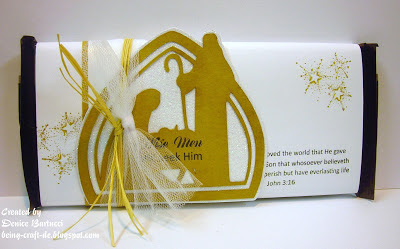 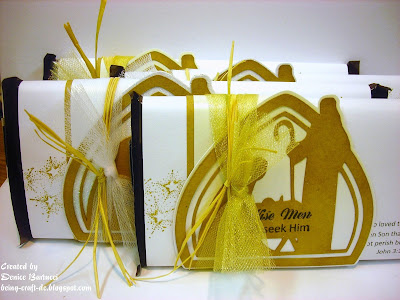 I think the candy wrappers look plain in the pictures, but when you see them they shimmer and shine perfectly as glitter paper and Spica glitter pens were used in all the right places.

I used the Inspired Heart cartridge for the nativity silhouette and it's shadow, both were cut at 3.5".  Both sentiments were stamped using  Heartfelt Creations Wisemen Pre-cut set, and the star stamp is over 15 years old. Ribbon and raffia were added. I wanted these to look nice but didn't want to put too much time into making them because I knew the kids would really just want the chocolate...like a 13 year old would say no to chocolate?!!

I'm entering this post in the Anything Goes Challenge that's going on at The Kraft Journal.

Thanks for taking the time to stop, read, and leave a comment....it's nice to be among friends.
:Dxx

hey denice! very pretty! love the ribbon and of course, the chocolate!

What a pretty idea! These are great little gifts to have, awesome job! The darn pic never shows all of the fun glittery stuff! lol! I always have that problem.

Oh this is gorgeous! So beautiful for this time of year! Thank you for sharing such a glorious project with us at The Kraft Journal! I really love how you made this sweet treat with the most important message of all! Merry Christmas!